Leading a retreat at the Findhorn Foundation in May 2003, I took some time off to visit Eileen Caddy, then 86 and one of its founders, whom I loved. There was something about Eileen that was more peaceful and joyful than I had experienced before.
‘I’m going to stay around now for as long as I’m needed,’ Eileen said. ‘And I don’t want to die anymore.’
She went on to explain how she had just been on a trip down south to visit her family. In the house of one of her sisters, she had fallen to the floor and she had also got stuck in the bath. In both instances, she was unable to lift herself up and had to call on the help of her sister.
‘I lay on the ground,’ she said, ‘and relaxed. I realised then that I needed help and I was able to say, I need help.’
Listening to her and watching her, it was inspiring to see what a deep transformation and inner surrender she had been through. She was flowing, glowing and bubbling with more life and love. The energy and attitude were beautiful.
It was also marvellous to witness a senior citizen still in the process of learning and transforming. With a smile, she was still up for the lessons that Classroom Earth gives us all. I was pleased too that she was now also experiencing relief from the back pain and severe spasms that she had been enduring over recent years. Her body was more comfortable now and so too was her attitude.
Some of you may remember that for a while she was quite grim and impatient about still being alive. She was open about this with everyone. She did not want to be in an old painful body relying on other people. She had done her work and was ready to move on! Her attitude was almost military. Mission accomplished!
That attitude has now melted. Once again, she had surrendered more deeply to the embrace of God’s love. She had pulled herself through that huge lesson which the last decades of life present to us all. She was flowing with the natural cycle of physical decline and its lessons of acceptance and new wisdom.
This was personally very poignant for me. Not so long ago my own mother, had not approached her death with such surrender. She was a great open-hearted, humorous woman and fiercely independent. Until the day she died, she retained her fiery sense of self-sufficiency and was intense as she resisted any dependence. She was also in physical pain – a pain that she endured with her resilient and stoic attitude.
It was a touching paradox for me, wanting my mother to surrender gracefully to the realities of her old age and yet respecting her courage and character. Her wilfulness and strength had once been the perfect manifestation of the vitality and flow of life – but they now needed to surrender and harmonise in order to allow healing.
In the end my mother chose to take herself out with an overdose rather than face the rest of her life in care. I had to respect her independence and choice. Yet also I felt some sense of a missed opportunity for healing and development
Illness + Spiritual Development = Healing
Suffering + Surrender-to-Universal-Flow = Spiritual Development
(Eileen Caddy died in 2006 at the age of 89) 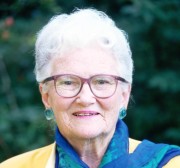