Jonah and the Whale – Initiation 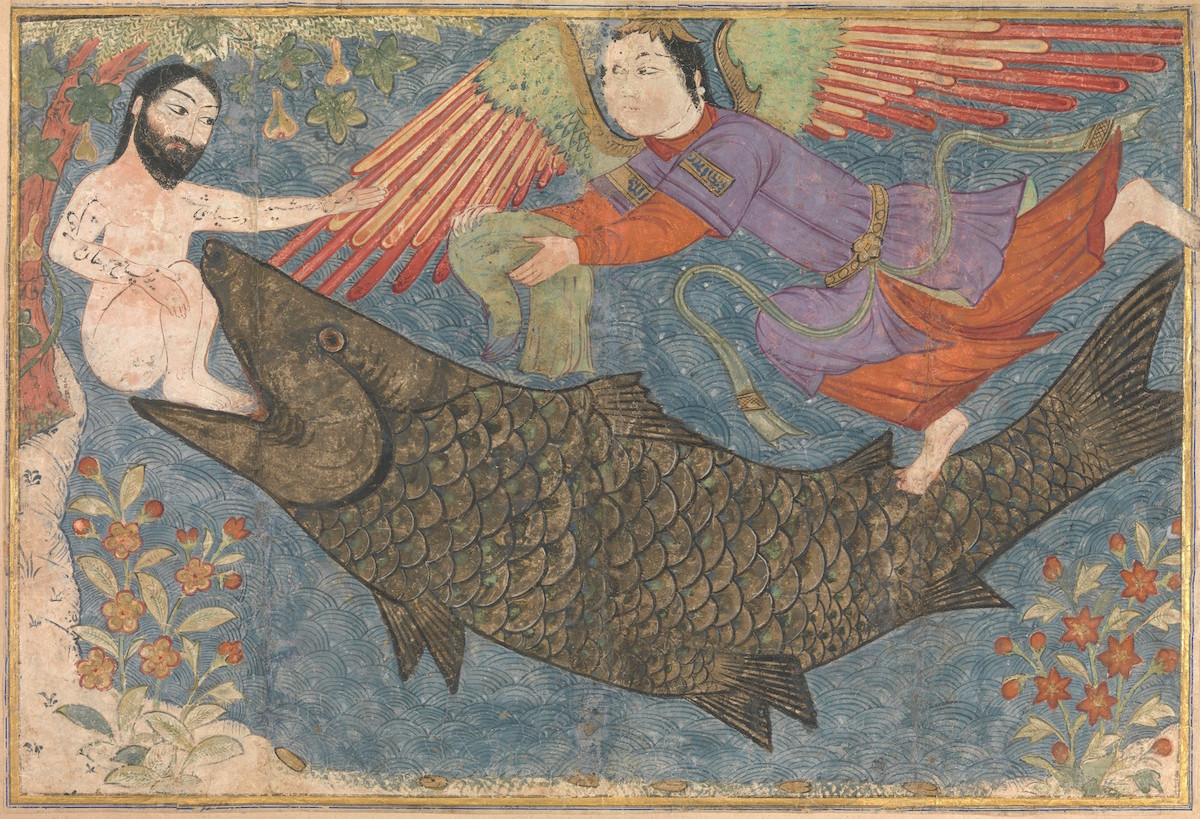 Can you imagine what it was like for Jonah in the belly of the whale?

In The Bible story Jonah was avoiding a dangerous mission to preach the word of God and escaping by ship to somewhere safe. But there was a terrible storm and, having confessed to the crew that he was disobeying God, he was cast overboard to save the vessel and the sailors lives.
But instead of drowning, Jonah was swallowed by a whale and spent three days and nights in the creatures belly, after which he was spewed forth on to a beach, a changed man. He now obeys God and takes up the dangerous mission, but instead of threat he is greeted with appreciation.
One way of interpreting this story is simple: Obey and trust God or youll suffer the fate of being swallowed by a whale.
But there is another interpretation. This is one of initiation. Jonah is everyman and everywoman on the spiritual path. He is avoiding the dangerous places of his own psyche, but in avoiding them he creates the tension and storm of an even greater crisis. He begins to disintegrate psychologically and could drown in the perilous ocean of wild emotions, but instead finds himself in the belly of darkness.
What does it mean to be inside the whale?
Taken literally, the experience would be awful. It would be a smothering nightmare. Compression. Slow disintegration. No exit. A complete hell state.
THE INSIGHT
But this is a fable of spiritual growth in which Jonah is reborn as Gods appreciated servant. He has in fact spent time in the womb of the greatest creature on our beautiful planet.
He has been in the womb of the cosmic parent. The experience was not hell. It was safe, warm, all-enveloping nurture. He was soaking in the classic spiritual experience: a full-body melting into the great ocean of bliss, power and benevolence the sea of cosmic consciousness, Buddha consciousness, Christ consciousness, the Muslim Garden of Delights, Nirvana, Heaven, unconditional love, the Tao.
Jonah was having the deepest of initiatory spiritual experiences. Avoiding his original spiritual calling, he became a man of bad luck. He could sink ships. But in his depression he found himself embraced by the benevolent cosmos and was transformed. As a grown man, as an adult, he was returned to the primal, fetal state of being a child of the universe.
One interesting way of looking at the current ecological crisis is that humanity is now a collective Jonah and we have been thrown into the belly of the whale. The solution is for humanity too to experience rebirth in depression.
But that is a nave and idealistic hope unless we as individuals consciously choose to heal and transform. This is where good psychic work white magic is so crucial. Our task is to bring the benevolent resonance of the cosmos into the confused and painful energy fields of humanity.
The great value of psychic phenomena is that they remind us that the invisible world of energies is real and to take it seriously. Contained by dense physical bodies, limited by our five major senses, it is easy to ignore the dynamic reality of the inner worlds. Everything in the universe including us is energy and consciousness. All our thoughts, feelings and attitudes radiate into the collective psyche and influence other people. We are continuously participating in humanitys mass karma.
WHAT WE CAN DO
Psychic events and experiences wake us up, and we can then make conscious decisions to take responsibility. What does this responsible psychic and vibrational work look like? Forgive me if I am stating the obvious, but here are some possibilities:
The first great act of conscious psychic work is always to wake up and connect with the benevolence of existence. Dont live in the belly of a hell state, but recognize that we are all in the womb of the cosmic parent. This act of consciousness radiates freedom.
Follow the great insight of the Buddha that desire is the source of all suffering. Stop desiring that people and things be a certain way. The very act of desire creates vibrations of control that clog up the flow of free life. Just as bad, when we dont get what we want, our displeasure adds to the psychic pollution. Focus on achieving enlightenment and liberation, not on getting what you want and fulfilling your desires.
When you experience distress, dont complain. It makes things worse for you and everyone else. Breathe calmly and compassionately, absorbing and transforming the negative vibrations. Remember one of the greatest of all meditation exercises: breathe in negativity and breathe out blessing. (Never do this if you are feeling emotionally or physically weak. When you bless distress with forgiveness and with compassionate good humour, what was stuck and compressed begins to move again. Like a stagnant lake, polluted energy regenerates when allowed to flow.
All of this can be done at home, at work, with friends. The whole point of being aware, empathic, psychic or sensitive is that you cannot avoid sensing and perceiving the energy work that needs to be done. The most important thing that you can ever do with your awareness is more fully to explore the essence of cosmic consciousness and unconditional love, and channel it to relieve suffering. And this is the exact point where I know that I am stating the obvious.