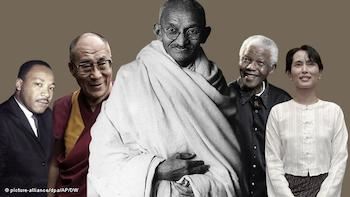 Here’s a dilemma that many of us face. On the one side we want a quiet life. On the other we want to create a better, more just and more loving world.

Does that description fit you? If so, then like me you may face a problem. When we are open with our family, friends, neighbours and colleagues about our idealism and spirituality, then sometimes we will meet scepticism and even upfront hostility.  (Do you have a relative you only meet at Christmas who always asks sardonically, ‘Still into all that weird and flaky stuff, eh?’)

Whether we like it or not, we are part of a paradigm war, a conflict of ideas and worldviews.

I was reminded of all this by the recent death of the wonderful Pat Pilkington, one of the co-founders in 1980 of the Bristol Cancer Help Centre, now the Penny Brohn Centre. Pat and Penny pioneered a holistic mind-body-spirit approach to cancer care which, supported by Prince Charles, has had international influence.

At one point however, twenty years ago, they came under vicious attack from the media and the medical establishment. They were accused of being deluded and endangering lives.Â  The attack was sustained and unpleasant. But there was a silver lining to the conflict because it forced Pat, Penny and their colleagues to be more professional and articulate about their methods and ideas. Marshalling their research, they began to argue effectively with their opponents and achieved respect and legitimacy. Today their approach is widely accepted as a positive contribution.

But here we have our challenge and contradiction.

Pat and Penny were creating a place of healing and spiritual medicine, yet they were forced into a harsh paradigm war.

Although I meditate and love being alone, since my late teens I have also been an activist for complementary healthcare and new approaches to spirituality. I have experienced many paradigm skirmishes beginning, of course, in my own family! My dad was an old style doctor and psychiatrist. My mother was a cynical New York journalist. You can imagine what they thought of new age spirituality and complementary medicine.

So, over the decades, have I learned anything useful about how to manage these paradigm wrangles? The following suggestions, gleaned from experience, might be useful for you.

Know your stuff. As Penny Brohn and Pat Pilkington experienced, goodwill and idealism are not enough. Research and know your subject. This will build your confidence and gain respect.

Centred and mindful. Whenever you find yourself in a skirmish of ideas, make sure you remain centred, grounded and calm. Otherwise your body language and attitude will wind up the situation. And the tension will be bad for your health.

Build bridges and be realistic.Â Use language and concepts that are understandable to your antagonists. Don’t expect them to understand what for you is basic.

Don’t assassinate. Be compassionately mindful that when someone changes their opinion or behaviour, a part of their identity is dying. Be friendly. Greet their soul.

Know which battle you are fighting. This is important and often ignored. There are at least three different arguments that you need to keep separate. It gets really difficult if they are mashed together. Let’s look at them one by one so as to be clear.

This is a dispute about whether spirituality is useful or intelligent and whether it is different from religion. Atheists and people from traditional religions are often suspicious of spirituality. To counter this scepticism I have a definition that you may find helpful:

Spirituality is everyone’s natural connection with the wonder and energy of life — and the instinct to explore that experience and its meaning.

Spirituality is about the growth of compassion and consciousness, heart and mind — love in action.

Spirituality is not the same as religion. It is not organised and has no doctrines. Remember too that the word ‘spirituality’ is used explicitly, for example, in the Education Acts of Parliament and in many NHS statements.

This is the squabble about the existence of invisible things like spirits, angels and chakras. Imagine telling Jeremy Paxman to talk to the pixies in his garden. Do yourself a big favour and, no matter how important the psychic world may be to you, don’t bring it into discussions about spirituality or complementary healthcare. You can easily talk about spirituality — connection, mindfulness and compassion — in a school governors or hospital board meeting; but if you introduce the psychic stuff you’ll provoke trouble and be seen as flaky.

Be careful. Remember that the 2008 Consumers Protection from Unfair Trading Regulations legislates that spiritualists and mediums can now only advertise their services as ‘for entertainment only’.

And then there is the prana divide. For most of us reading this piece the idea of vital energy is completely normal, but unfortunately it is a red rag to a bull and the core issue in the medical paradigm war. Medical science cannot measure prana and has no theory for it. Be aware too that in 2008 the BBC removed all the complementary medicine pages from its website. Nevertheless a huge proportion of the UK uses complementary medicine and healing, because it works.

Finally it is interesting to assess the state of play for each one. See if you agree with my appraisal. (It would be good perhaps to review them annually.)

The spirituality paradigm is doing very well and gradually integrating into the mainstream.

The metaphysics/psychic paradigm has popular support but is rejected by the mainstream.

The vital energy/prana paradigm has popular support and is only slowly developing a foothold in mainstream medicine.

I hope all of the above might be of some use to you if you ever find yourself in one of those difficult conversations again.

In the meantime how shall I end this article? I know.

May the angels of peace and healing be with you.

And if you want to, debate with me the existence of angels or healing . . .